RECORD OF THE WEEK! DOOMCANNON – RENAISSANCE

By Az FrancoJuly 19, 2022Uncategorized
No Comments

For as long as jazz has existed, it has been used to articulate the social and political timbre of the community that produced it. Whether it’s the boundless experimentation of Civil Rights-era bebop or the way free jazz soundtracked the turbulent Black Power ‘60s, jazz has always been inextricably tied up in the project of Black liberation around the world.

Renaissance, the debut full-length from London-born composer and multi-instrumentalist DoomCannon, continues this tradition by employing the compositional and improvisational potential of jazz as a means of speaking to the politics of contemporary Black life. Combining a groovy jazz-funk sensibility with the weight and rhythmic thrust of hip-hop, Rennaisance is fresh and propelled by a fiery intensity.

The album opens with “Dark Ages,” a heavy, wistful tune that lures in listeners with a delicate electric piano motif. The head-nodding beat and splashy cymbals kick the tune into overdrive as the main melody soars around the rhythm section. “Uncovering the Truth” is built around nimble-yet-forceful drumming and a lengthy sax solo that’s free as it is exploratory. The album closes with “Black Liberation,” which acts as its emotional thesis statement. DoomCannon’s piano drifts softly around a mournful bassline as Sienna Hamilton’s cries of anguish rise up then fade into the background. Doomcannon lends his voice to the track, sternly proclaiming that “The UK is not innocent,” his indictment reminding us of the role that Europe has played in the global subjugation of Black people. The tone of “Black Liberation” is subdued but in no way passive—there is rage and determination burning in each note.

Pulling from a deep sense of history as well as palpable anger at the tumultuous state of the world today, Renaissance is not just full of inventive musical ideas, its intention points towards a higher purpose. Like the best jazz music of the past, Renaissance uses the music to call for a better world for Black folks everywhere. 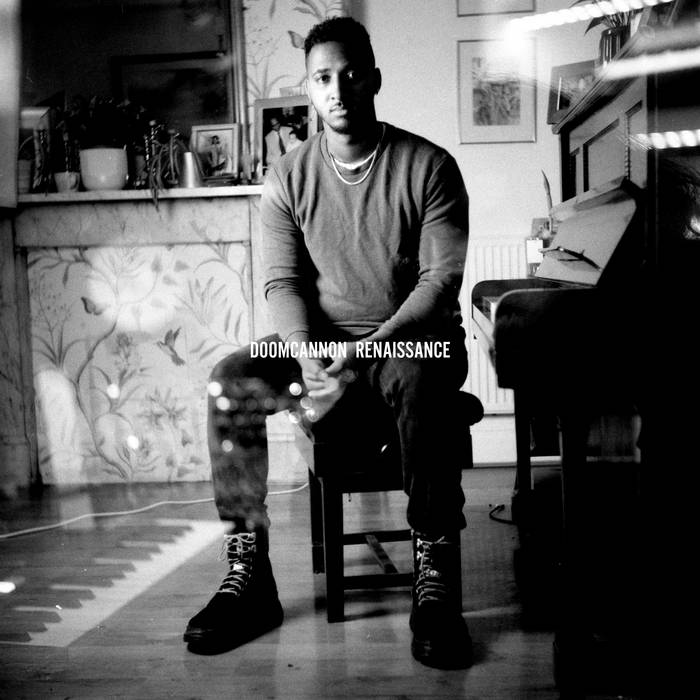 ‘Renaissance’ signifies the birth of a new era in DoomCannon’s trajectory, inspired by an accumulation of experiences over the past four years and defined by significant events like the global pandemic to the worldwide outcry of the Black Lives Matter movement in the summer of 2020. DoomCannon aspired to create a concept album, fashioning accessible music and home to a powerful universal message of equality and humanity, where listeners are invited to conceive a world beyond the society we currently live in. A world far from the UK’s colonial past and present, where human experience and compassion is at the epicentre of Government agendas, free from systemic injustice – where equality and community spirit reigns supreme.

Sequentially moving through a rich breadth of soundscapes, opening with ‘Dark Ages’ that introduces the current state of the world consumed by greed and confusion, with distorted echoes of ‘I want more’ swirling through a dense sonic atmosphere. In contrast, the serenity of ‘Entrance To The Unknown’ is a solitary moment of reflection. DoomCannon likens this to the start of an apocalyptic movie, where the main character breaks the fourth wall, directly addressing the audience, and the lines between fiction and reality are blurred. A balladic moment ushering in this new aforementioned era. ‘Amalgamation’ is a commentary on depleting measures of community spirit in society, signified by the frantic, disjointed opening that culminates into one unified symphonic climax. With the light of optimism and hope shining through on ‘This Too’ – uplifting dilla-esque drum beats pulsate throughout, continuing this illumination through an intimate piano solo in ‘Times’ that builds like the warmth of a sunrise, featuring distinctive vocals by Lex Amor, slowly infiltrating with quietly reassuring whispers and enchanting saxophone riffs. ‘Renaissance’ draws to a close with a succinct prologue that powerfully addresses DoomCannon’s ambition, creating the perfect conditions to absorb its impactful message of ‘Black Liberation’ – expressing a deep wish for equality, an end to police brutality, social injustices and a call for a profound sense of community in UK culture; as DoomCannon expresses:

“When writing the album, it felt like a transition from writing in other bands and being a part of other people’s projects to having my own voice and to speak about my Black British experience growing up around London. There are things I had to “unlearn”, ways I had to shape myself and my views on the world; greed, corrupt governments and police brutality within the UK and my stance on it all. ‘Renaissance’ is my letter to London about how it raised me and shaped who I am today.”

As a London-based composer, producer & multi-instrumentalist, DoomCannon spearheaded a plethora of forward-thinking, improvised Jazz-inspired outfits (Project Karnak, Triforce). DoomCannon dabbled in flute and percussion from the age of eleven and classically trained in piano as a teenager where he joined the prestigious Kinetika Bloco youth performance group and training programme, a rite of passage for many of the catalysts of the British Jazz explosion such as brothers Theon & Nathaniel Cross, Mark Kavuma, Sheila Maurice Grey to name a few. Under the watchful eye of musical mentors Matt Fox (Kinetika Bloco) and Gary Crosby (Tomorrow’s Warriors), DoomCannon mastered his craft and endeavoured on the Kinetika Bloco Leadership Programme becoming a teacher himself. Attending a fateful Jazz Re:freshed weekly session at MauMau bar, DoomCanoon encountered saxophonist Ahnansé, they started playing together soon afterwards. DoomCannon garnered the attention of award-winning vocalist, Celeste, where he was invited to become Musical Director performing live at the Brit Awards and Later with Jools Holland. Gaining respect as a leader in the scene, DoomCannon has toured internationally as a member of Nubya Garcia’s band and invited in his own right to curate a residency at the legendary Ronnie Scotts. Presenting his solo project at Abbey Road Studios, selected via Jazz Re:freshed as part of the SXSW/ British Council collaboration, and a headline show at Peckham Audio on 30th April, the stage is set for DoomCannon to raise the bar again in 2022 and beyond. 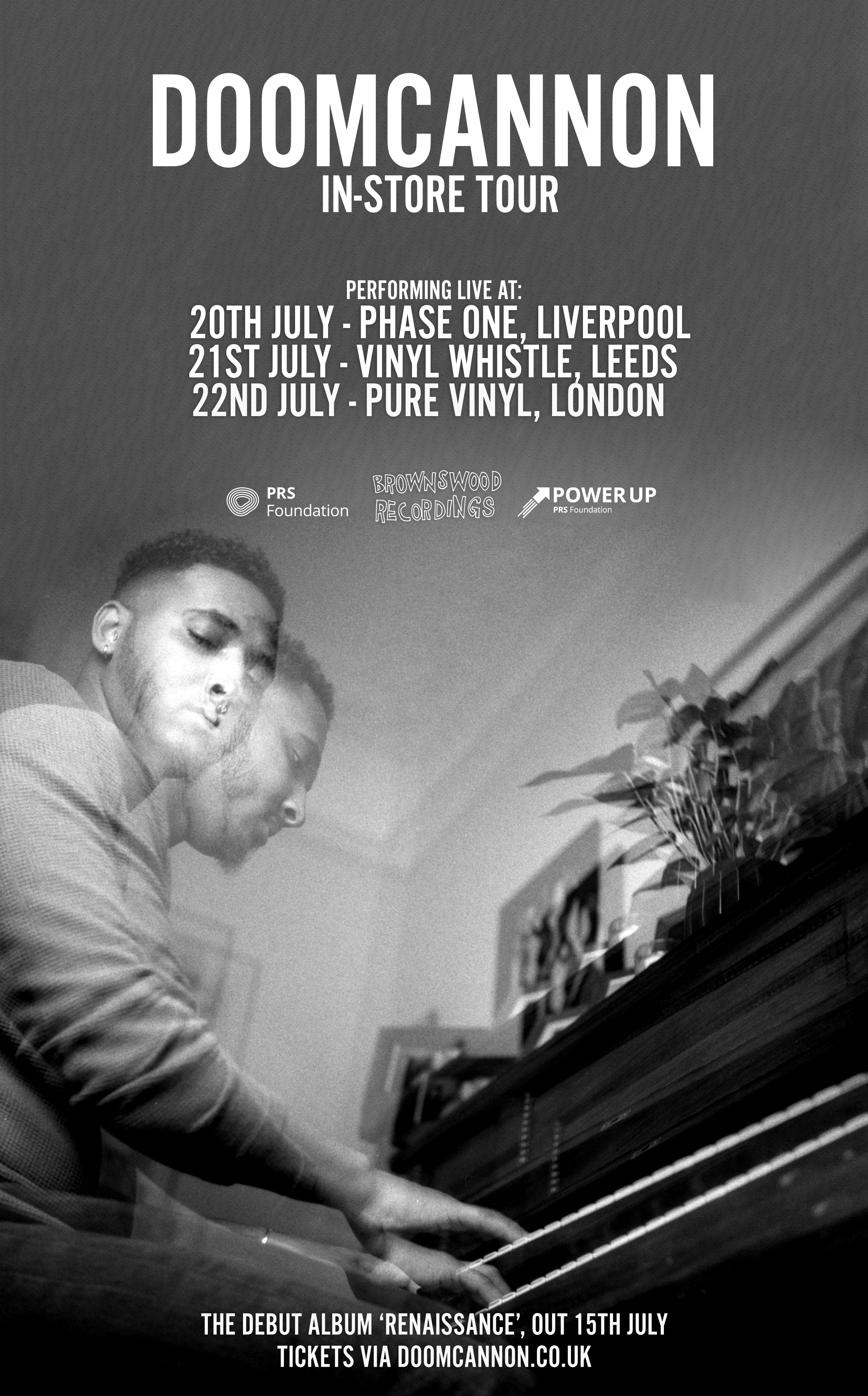