Asylums – new album ‘Signs of Life’ is out now

Scouring the music world for signs of life? Asylums’ new LP may be just the thing you’re looking for.

A record of raw energy and intimate emotion wrought with a cinematic scope, Signs of Life roars with a fiery, feverish passion: Born of trauma, defiance, and hope, the UK band’s fourth full length album aches with the intensity of modern living as the band reckon with disruptors, detractors, and the visceral depths of human emotion.”

Released October 28 via the band’s own Cool Thing Records, Signs of Life is a resounding triumph of a rock record. Hailing from Southend-on-Sea, Asylums have been dishing out charming and churning pop-infused rock songs for the better part of the past eight years. The four-piece of Luke Branch (Vocals / Guitar), Jazz Miell (Guitar), Michael “Mike” Webster (Bass), and Henry Tyler (Drums) formed in 2014 and have self-described as “art rock and agitpop” ever since.

Asylums’ new record is a testament to how vital art can be in times of turmoil, and how it can add so much more colour to this already colourful life.

A bright, breezy collection of beautifully rousing and deeply thoughtful indie-rock belters, it’s a record that feels as much a summation of where the band are right now as much as the rest of the world. Through the uncertainty and fear of the last few years, the band have looked to the things in life that really matter, and applied them to a set of songs that are as inspiring as they are emotionally overwhelming.

It’s a wonderful body of work to be able to pull out of the darkness. – Rocksound. Read Full Feature 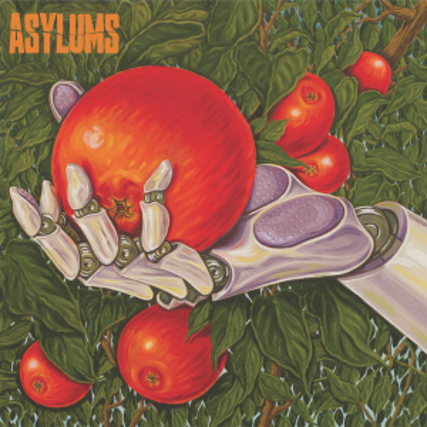