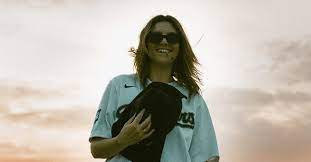 By Az FrancoAugust 1, 2022Uncategorized
No Comments

Co-produced alongside Sarah Tudzin of Illuminati Hotties, Lou’s debut full-length ‘Pure Chaos’ arrives April 29th via Balloon Machine. ‘Pure Chaos’ is Lou’s take on our futile yet unavoidable attempt to give meaning to the chaos of life. Emblematic of her ‘all-in’ personality, it is a vibrant collection that shines with humour, invention and a peacock swagger.

Lead single, ‘Uppercut’ perhaps best symbolises the album concept. During the truly exultant chorus, Lou pledges to “have fun, even when we’re back on earth as pond scum”.

This commitment to seeking out joy, which not only informs ‘Uppercut’ but every aspect of ‘Pure Chaos’, comes from Lou’s admiration for Las Vegas.

Speaking about it on MUNA’s Gayotic podcast, she said: “Las Vegas is the funniest, sweetest thing we could have done as humans. I acknowledge that it’s fucked up but it started with us being in the middle of the desert and asking, ‘What do we like? Games, nudity, lights and money’ and making a playground out of that. It’s hedonism at it’s finest and while it may have failed spectacularly, the initial endeavour was fucking awesome.”

This spirit of Las Vegas also helped Lou find pleasure in life’s unpredictability. While it may be human nature to apply a narrative thread to life, ‘Pure Chaos’ thrives in its inconclusivity and spontaneity. With very little warning it transports us from lesbian desert sex parties to ‘a late night Fred’s’ – Lou’s local takeaway – with fast-friends ‘Mads, Sarah, Brian and Ren’.

This chaos also comes through in the urgent-genre shifts which move unrelentingly from short skits to acoustic balladry to a capella chants, and the unique instrument selections which see a bottle become the chief percussive instrument on previously released single ‘Valkyrie’ and the rustle of a Snickers wrapper feature in a similarly principal role on album-track ‘Big Anvil’.

Lou’s humour, warmth and filth shouts out unapologetically from every sentence of ‘Pure Chaos’, indeed it’s hard to think of an album that represents its creator more. Though shame may have followed such admissions previously, ‘Pure Chaos’ is the sound of an artist owning every ounce of her being and revelling in it with utter abandon.